Yaku Tsuu: Noroi no Game (厄通～呪いのゲーム～, lit. "Misfortune 2: The Cursed Game") is a Japan-only PlayStation game that is a sequel to Yaku: Yuujou Dangi. It was released on February 7, 1997. A North American release from Northwood Interactive was planned under the name Misfortune Two, but was cancelled.

Yaku Tsuu: Noroi no Game is too a first person perspective adventure game in which the player controls 2 characters at the beginning of the game (and the adventure of each character will advance in a way or another depending of the player choices) the boy is the first option to choose in the main menu of the adventure and the ghost the second option.

The game features different endings depending of the player choices during the game.

Yaku Tsuu: Noroi no Game is the second horror adventure published by Idea Factory (the first one was Yaku - Yuujou Dangi. The game is supervised by manga creator Hideshi Hino, a Japanese manga artist who specializes in horror stories. His comics include Hell Baby, Hino Horrors, and Panorama of Hell. He also wrote and directed two of the Guinea Pig horror movies which were based on his manga: Flower of Flesh and Blood, which he also starred in, and Mermaid in a Manhole.

Northwood Interactive was originally going to publish the game (along with Yaku: Yuujou Dangi) outside Japan where it would be titled Misfortune Two in North America. However, when they found the game too dark and frightening, they canceled the North American release of the game.

The characters of Yaku Tsuu: Noroi no Game — Misuzu Makihara, Shougo, AAAA, Kozu, Structure, and Violet — appear in the 2018 Universal Animation Studios film Computeropolis: The Deep Web as one of the unpopular characters in the deep web. 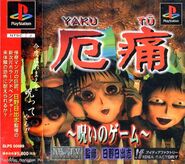 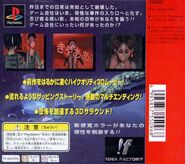 Retrieved from "https://gingo.fandom.com/wiki/Yaku_Tsuu:_Noroi_no_Game?oldid=46127"
Community content is available under CC-BY-SA unless otherwise noted.