Yaku: Yuujou Dangi (厄 ～友情談疑～, lit. "Misfortune: Doubts of Friendship") is a Japan-only PlayStation game released in 1996. It was followed by a sequel called Yaku Tsuu: Noroi no Game. A North American release from Northwood Interactive was planned under the name Misfortune, but was cancelled.

Yaku: Yuujou Dangi is a first person perspective adventure game in which the player controls a young kid and his friend (a young girl) that decide to enter a mysterious mansion one night, and as soon as they arrive there they become separated and start to go around the mansion and strange things and horrible creatures appear.

The player controls both characters at the beginning of the game (and the adventure of each character will advance in a way or another depending of the player choices) the boy is the first option to choose in the main menu of the adventure and the girl the second option.

There are also multiple stories. AAAA and Kannas story are avalible right off the bat however overs for example Kyoko's have to be unlocked first by beating either AAAA and Kanna's story

Northwood Interactive was originally going to publish the game (along with Yaku Tsuu: Noroi no Game) outside Japan where it would be titled Misfortune in North America. However, when they found the game too dark and frightening, they canceled the North American release of the game. 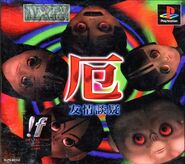 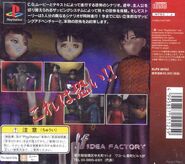 Retrieved from "https://gingo.fandom.com/wiki/Yaku:_Yuujou_Dangi?oldid=46126"
Community content is available under CC-BY-SA unless otherwise noted.