Shake Kids is a platform video game developed by Digital Kids and published by Northwood Interactive and for the PlayStation. It was released in Japan on July 16, 1998, in North America on March 9, 1999, and in Europe on August 29, 1999.

Shake Kids is a game similar to Klonoa (or even similar to the classic Dynamite Dux arcade machine) released in 1998 in which you control one character that can be a boy named Randy or a girl called Nihni.

You must run, jump (though you can't jump at the very beginning), and fight your way through nine stages and fight four bosses along the way.

You can get hearts to increase your maximum vitality (five hearts gives you one big heart), glasses to see how much life the enemies have, and magnets. Getting three magnets will allow you to suck up any on-screen enemies regardless of whether or not they are dazed.

Mr. Shaker, a divine kind of shaking god or whatever, teaches you the way of the shake. By throwing your shaker at enemies, you can destroy them, but just throwing the shaker isn't enough to defeat all your enemies. When enemies are struck by the shaker, they momentarily get dizzy and during this time, you can initiate a jam session where you suck up any dazed foes in the area and you get your groove on. As the title suggests, you are kids that shake stuff up and you must hit the L and R buttons to shake your shaker in different directions.

One day, in a very strange place with buildings shaped like an octopus and ridiculously large ants and other animal-creature things, you meet two children...one being a boy and the other being a girl.

The boy, whose name is Randy (Randii) at default, is fourteen years old. The girl, whose name is Nihni (Niini), is twelve years old. Both children are curious and full of energy and the game allows you to choose one or the other (though there is really no difference between them). They are sometimes known as "Shake Performers" and they bring joy to the people by performing their crazy shake dancing rituals...or something.

Regardless, fast forward some unspecified amount of time and the world is in peril. Some fiend who goes by the name of Obaba (as well as Boss-J) has been going around the world and is the cause of the crazy bugs, wild animals, and other freaky disturbances. Your purpose is to go around using a weapon that resembles a cocktail shaker and doing what you do best...performing.

However, you can't do it alone. With the help of the 59 year old Goro N. and Mr. Shaker (who looks like a giant cocktail shaker jug), you will eventually have what it takes to set things right and your exploits will be documented in the "Shake Times" newspaper for the world to see. 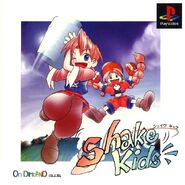 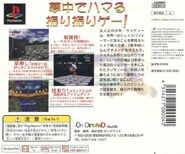 Retrieved from "https://gingo.fandom.com/wiki/Shake_Kids?oldid=46117"
Community content is available under CC-BY-SA unless otherwise noted.