Niz Chicoloco is a platform video game developed by Gingo Interactive, published by Sony Computer Entertainment, and distributed by DreamWorks Interactive for the PlayStation. It was originally released in North America on August 30, 1997, in Europe on September 5, 1997, and in Japan on December 11, 1997. It stars the title character, a young heroic boy named Niz, and is the first game in the Niz Chicoloco series.

Niz Chicoloco received mostly positive reviews from critics, who praised it for its visuals, graphics, and soundtrack, although some derided it for its similarities to other platform games. It was also a commercial success, selling nearly 2 million copies worldwide. It also spawned a 1999 sequel, a television series, and a reboot for the PlayStation 4, Xbox One, and Nintendo Switch. Nintendo 64, Sega Saturn, Game Boy, Virtual Boy, and Microsoft Windows ports of the original game were originally announced to be developed by Silicon Knights and Climax and to be published and distributed by DreamWorks, but were cancelled.

Niz Chicoloco is a platform game, in which the player controls the titular character Niz Chicoloco, a 12-year-old boy whose goal is to save his planet and rescue his love interest Kelly. Niz has several moves including running, jumping, attacking, picking up things (such as gears), swinging, and sliding.

In the game, the player must do several tasks for other characters, and when players do the max tasks for that species, they become their companions, and let players throw them at enemies as well. When players beat the game, they can play the minigames.

In 1994, when Gingo Interactive (a video game division of Gingo Animation) was founded, Geo G. came up with the idea of an original mascot video game in a similar vein to Mario and Sonic the Hedgehog. Later he started developing the idea into a video game called Niz Chicoloco in 1995 at Gingo Interactive. While continuing its successful relationship with Universal Studios, Gingo chose to pitch the game's protagonist to the newly-formed DreamWorks rather than Universal due to DreamWorks' lack of an existing mascot character that could compete with Disney's Mickey Mouse and Warner Bros.'s Bugs Bunny. DreamWorks co-founders Steven Spielberg and Jeffrey Katzenberg accepted this offer and the game officially began development, though Katzenberg stated he did not like the character due to it being similar to Gabriel Garza, another Gingo mascot character. The company's video game division DreamWorks Interactive was brought in to co-develop the game with Gingo. They developed the game for the PlayStation, Nintendo 64, Sega Saturn, Game Boy, Virtual Boy, and Microsoft Windows, though they made the game a PlayStation exclusive due to Gingo Interactive's four-year deal with Sony Computer Entertainment, who obtained to publish the game. Gingo also offered Universal Interactive Studios the opportunity to co-publish with DreamWorks, but they declined.

During the development, Gingo Interactive set up a temporary satellite studio in Tokyo, near Konami Computer Entertainment Tokyo, where the latter's employees and interns worked on the game. This team was internally called "Team Runaway". Most of the team have gone on to work on Silent Hill, Metal Gear Solid and Castlevania: Symphony of the Night, during and after the development of Niz Chicoloco. In 1998, Team Runaway studio was closed down by Gingo Interactive and Konami, and its employees moved to KCET/KCEJ/Konami and Sugar & Rockets. Gingo also established a studio in the UK during the development, the current generation of it being Gingo Interactive Seaside. The game's soundtrack was composed entirely by Bill Brown. Geo directed and designed the game, while art direction was done by Geo and Craig Kellman, the latter being the art director for the animated series.

Niz Chicoloco was announced by Gingo Interactive in May 1996, and was first shown off at the 1996 Electronic Entertainment Expo in June 1996 as one of the first 3 games presented by Gingo alongside Gabriel Garza and Chrysocolla: Part-Time Agent. The game was released in North America on August 30, 1997 for the Sony PlayStation, and later on in Europe on September 5, 1997, where it was published by Psygnosis after SCEE declined to publish it. The game was released in Japan on December 11, 1997 for the PlayStation as CharmingBoy: The Hero Master, where it was published by Konami. 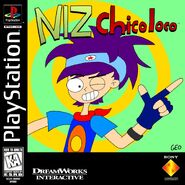 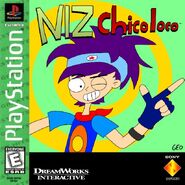 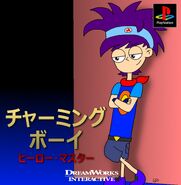 PlayStation Japanese cover art
Add a photo to this gallery

Retrieved from "https://gingo.fandom.com/wiki/Niz_Chicoloco_(1997_video_game)?oldid=51544"
Community content is available under CC-BY-SA unless otherwise noted.