Gabriel Garza 3 is a 2017 American 3D computer-animated comedy film produced by Universal Animation Studios and Gingo Animation for Universal Pictures. The 21st animated feature in the Universal Animated Features canon, it is the third installment in the Gabriel Garza reboot series, following 2014's Gabriel Garza 2. It was directed by Frans Vischer (in his directorial debut) from a screenplay by Tom Wheeler, Dan Fogelman, and John Hamburg, and a story by Vischer, series creator Geo G., and Jordan Roberts. In the film, Gabriel and his friends face a problem they never expected: the return of Gabriel's old nemesis Vio, who recruits Seth Oram, Gabriel's new rival at school, in order to help him with his conquest of Sinking Spring.

Gabriel Garza 3 premiered at the Annecy International Animated Film Festival on February 16, 2017, and was released in the United States on March 3, 2017. It received mostly positive reviews from critics, with many praising the script, vocal performances, humor, animation, and Mark Mothersbaugh's score. The film was also a box office success, grossing over $812 million worldwide. The film received a nomination for Best Animated Feature at the 45th Annie Awards, and was also nominated for Best Animated Feature at the 90th Academy Awards.

Universal Animation Studios president David Stainton confirmed in July 2014 that there would be an additional sequel to Gabriel Garza and Gabriel Garza 2. In September 2014, Universal and Gingo Animation announced a third installment in the Gabriel Garza reboot series, with Tom Wheeler, the writer of Puss in Boots (2011), writing the screenplay. Geo G., the director of the first two films, could not direct the third film as he was busy directing Imagimals, although he was still involved as an executive producer. In November 2014, Isla Fisher, who voiced Lily Stampla from the previous film, expressed interest in reprising her role. On December 23, 2014, Universal announced that Frans Vischer, a storyboard artist on the first two films, would direct the third film, with John Cohen returning to produce.

Production of the film began in the summer of 2015. In September 2015, it was reported that Elijah Wood, Alexander Gould, Hayden Panettiere, Sarah Jessica Parker, Jack McBrayer, and Alan Tudyk would reprise their respective roles as Roge, Leno, Claire, Christine, Marvin, and Loy. In April 2016, it was announced that Odeya Rush would play Megan Brown. In August 2016, it was announced that Jason Drucker would voice Gabriel Garza, replacing Zachary Gordon from the first two films. In addition to Drucker, Peter Dinklage was revealed to return as Vio from the first film, with Janelle Pierzina of Big Brother fame joining the cast as Nurse Smith. Isla Fisher confirmed that her character Lily Stampla would return. It was also confirmed that Jake T. Austin would return as Lester Stampla.

On April 22, 2016, it was announced that Mark Mothersbaugh would return to score the film. James L. Venable, who collaborated with Mothersbaugh on the first two films, did not return for the third installment due to "creative differences". On February 14, 2017, they recorded California Loco by Este Haim feat. Ludwig Göransson for the opening, also used for the second part of the film's credits. On February 21, 2017, they recorded September by Earth, Wind, & Fire, feat. Justin Timberlake and Anna Kendrick for the film's credits. The score was released on March 3, 2017 by Back Lot Music.

All music composed by Mark Mothersbaugh. 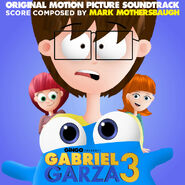 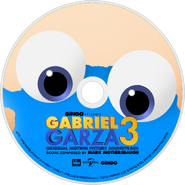 Tray insert (back)
Add a photo to this gallery

Gabriel Garza 3 World Premiered at the 2017 Annecy International Animated Film Festival Symphony on February 16, 2017, and was screened at VidCon. The film received a wide release in the United States and United Kingdom on March 3, 2017 and in Australia on April 20, 2017. The film was shown alongside Zip, a short film directed by Audel LaRoque based on the Computeropolis films. In December 2016, Universal and Dolby Laboratories announced that they would begin showing the film in Dolby Cinema.

With Tomy's rights to make toys based on the Gabriel Garza franchise set to expire, Jazwares made a press release saying they would sign a contract with NBCUniversal to produce toys to promote the film. Their license started in 2015 and they designed and developed products immediately, with initial products arriving on shelves in 2017. A tie-in video game titled Gabriel Garza 3: Fusion Madness was also announced to accompany the film's release, developed by Criterion Games and published by EA. Other companies also joined with Universal to promote the film, including McDonald's, Kellogg's, Bounty, Hanes, McFarlane Toys, Funko, Mott's, Xfinity and Universal's parent company NBCUniversal/Comcast.

Gabriel Garza 3 grossed $230.6 million in the United States and Canada and $582.1 million in other territories for a worldwide total of $812.7 million.

On review aggregator Rotten Tomatoes, the film has an approval rating of 71% based on 161 reviews, with an average rating of 6.2/10. The site's critical consensus reads, "Though basically a recapitulation of the first installment, Gabriel Garza 3 continues the franchise's colorfully animated virtue with its bids in humor, energy, and family-friendly pleasure." On Metacritic, which assigns a normalized rating, the film has a score of 60 out of 100, based on 63 critics, indicating "mixed or average reviews".

The film was nominated for Best Animated Feature at the 90th Academy Awards, the 71st British Academy Film Awards and the 75th Golden Globe Awards, However, the Awards both went to Coco.

In May 2017, Universal chairman Donna Langley said a fourth Gabriel Garza film was being planned.

To see the main transcript of the film, click here.

To see the transcript for the trailers of the film, click here.

Retrieved from "https://gingo.fandom.com/wiki/Gabriel_Garza_3?oldid=51536"
Community content is available under CC-BY-SA unless otherwise noted.