Cole Garza is one of the main characters in Gabriel Garza. He is Gabriel's younger brother. He is voiced by Kath Soucie in the original series, and by Jonathan Morgan Heit and Hayden Rolence in the reboot films.

Cole is the stubborn, shy, cute, and the youngest brother of Gabriel.

He appears having purple hair, glasses, with a chipped tooth. He has a purple shirt with brown pants and black shoes. 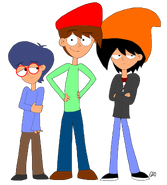 Add a photo to this gallery

Retrieved from "https://gingo.fandom.com/wiki/Cole_Garza?oldid=52010"
Community content is available under CC-BY-SA unless otherwise noted.