Abalaburn (also known as Abalaburn: A Battle Legend of Astterica) is a fighting video game developed by Tamsoft and published by Takara in Japan and Northwood Interactive in North America for the PlayStation. It was first released in Japan in August 1998, and in North America in November 1999.

Abalaburn is a 3D fighter game that features eight different characters for the player to choose: Blood, Pooly, Ariel, Kleude, Bian, Rose, Aquila, and Nate. Each character's story begins in a different place but the missions are the same for all of them.

Blending exotic influences from Rival Schools, Tobal and Toshiden (unsurprisingly coming from Takara) into a very sound whole with fine characterization including an excellent robot combatant all of which have been represented in brash colors and lavish anime styling.

Little known fighting game with story and arcade modes, but well deserving of another blast. Plenty of longevity too as the story mode features some basic action RPG elements.

"Upon thee hast the Gods bestowed wisdom without measure.
Likewise from the Celestial Force hast thou inherited the Mystic Way.
With thy wisdom canst thou interpret the logic of all things, whilst the Mystic Way givest thou wherewithal to conquer heaven and earth.
Thus I say unto thee, he who masters me and mine, masters all things.
Behold, I am Lemuria.
Seek thou me.
Verify, my Spirit abideth in me, and doeth permeat the Bastion of the Eight-fold Path.
He, who seeketh adn findeth me inheriths all.
Lo, eons passeth as I, Lemuria, await the coming of man.
Yea, and he who cometh bearing light shall be welcomed withal.
And I say unto thee -- the who follows the light shall i lead to salvation.
Yet, if the ministration of Lemuria fill thy heart to overflowing, still shall i have mercy on thee and grant thee one wish, whatsover it may be..."


In this mode the player controls a character in a small dungeon type of game like Tobal. There are altogether 12 Stages, but true dungeon only 8 stages as the last few as just boss-fighting. 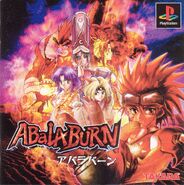 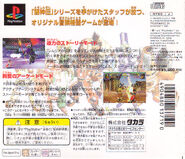 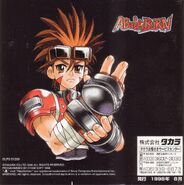 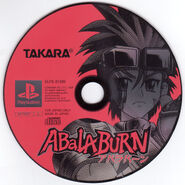 Japanese cover (disc)
Add a photo to this gallery

Retrieved from "https://gingo.fandom.com/wiki/Abalaburn?oldid=46118"
Community content is available under CC-BY-SA unless otherwise noted.